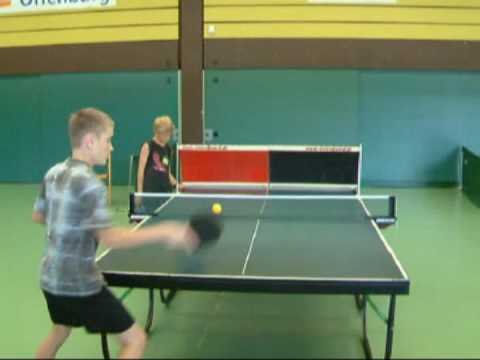 Recently, I was helping a young player to develop a topspin forehand in Table Tennis. The player wanted to work on brushing the ball more and I suggested that we do an exercise where they monitored how much brush was on the ball for each shot using a scale of 1 – 5 where 1 = no brush and 5 = lot of brush. We set the drill up and the player started calling out how much brush was on each shot;.. 2,..3,..3,..3,…2,…4,..3,…. After approx. 10-15 balls we stopped, and I asked the player, ‘what did they notice during the exercise?’ The player said that they noticed that sometimes they would ‘slap’ the ball instead of brushing it, which they thought was due to the fact that they used to play tennis.

As a coach, I particularly enjoy listening to a player who has experienced something in their awareness. Using their own words, I asked the player if they would like to change their scale to notice when they ‘slapped’ or ‘brushed’ the ball. The player agreed and suggested that 1 = ‘Slap’, 2 = ‘half slap and half brush and 3 = ‘full brush’.

As the player focused on noticing how much brush/slap they had for each shot, they started to relax. And, realising that they weren’t going to be judged as ‘right’ or ‘wrong’ with their technique, the player started to rotate and transfer their weight more, and swing their arm up and through the ball more freely.

More effective natural learning can happen when we help our players to focus their attention with non-judgemental awareness on something important to learn, like movement, balance, contact point, swing, footwork etc.

SUPER-SPECIAL OFFER FOR TENNIS COACHES
– SAVE 70%!

OUR ONLINE ZONE TRAINING & CHILD-CENTERED COACHING COURSES ARE JUST £10 FOR THE MONTH OF AUGUST 2020.

Thank You
To Everyone Who Attended
The Inner Game Conference!

Timothy Gallwey, founder of The Inner Game and recognised by many as the father of modern coaching, presented a UK conference especially for coaches and players of all sports at Hertfordshire University with a follow up Golf Workshop at Batchworth Park Golf Club.

Coachingkids4selfbelief are honoured to have been involved in hosting the event, held in April 2019, which celebrated 45 years of The Inner Game – quite a journey!

We hope that everyone found as much inspiration from Tim’s wisdom as we did.